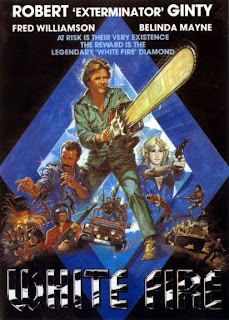 You can tell you're in for a treat right from the first frame of White Fire, a 1984 Robert Ginty vehicle made a few years after the surprise success of the blowtorchsploitation classic The Exterminator made the hangdog William Sanderson lookalike an unlikely action hero. White Fire opens in media res, with some blue-tinted footage of a family running in slow-mo from some Nazi cocksuckers. Dad grabs a gun and blasts one of them, but then another one hoses him down with a flamethrower, the orange fire blooming bold against the cyan cinematography. Mom goes down in a hail of gunfire on a beach. It seems like the kids, an 11-year-old boy and his little sister, are about to join their parents in death, when out of nowhere a burly lumberjack-looking dude comes up, snaps a Nazi neck, and takes them with him. This intro's mix of artiness and crappiness made me assume White Fire was Italian, as did the presence of Fred Williamson's name in the opening credits. (The Hammer, as I'm sure you know, made more movies in Italy than John Saxon, who made more movies in Italy than anyone else has ever made movies anywhere.) But no, actually it's a Franco-Turkish co-production. The Turkish part becomes clear in the next scene, which arrives with a smash cut to an establishing shot of a bunch of minarets and some onscreen words reading "ISTAMBUL [sic] - 15 YEARS LATER." The French part makes sense later, when all the incest starts happening.

To the accompaniment of the movie's theme song (a moderately awesome cock rock ballad that comes complete with lines like "White Fire! Like a thunderball! Crashing through the wall!"), we're reintroduced to the brother and sister from the first scene, now played by Robert Ginty and some little blond chick. They appear to be diamond thieves, which must be a hard life because it seems to have aged them at least 25 years in the 15 that have passed since we last saw them on that beach. Ginty looks about 40, 45, thanks to a semi-sleazy mustache that makes him look like a theatrical booking agent, the kind who mostly handles puppeteers and exotic dancers who specialize in bursting out of cakes. There is no explanation for why these two presumably European children grew up to become Americans, but I suppose that's movie magic for you.

Soon, Ginty and Sis get captured by some assholes with unconvincing Italian accents. They escape using the ancient Turkish method of punching everyone a lot. But then Ginty gets cornered, so he picks up a chainsaw, which is what everyone should always do in every situation. "When in doubt, chainsaw that shit," that's my motto. Ginty agrees with me, proceeding to swing the saw around willy nilly and cut open some insert shots of sheep guts and denim. This is when you know it's okay to relax. It's not even 20 minutes into the thing and we already have multiple chainsaw disembowelings. This is the movie letting you know that you're in good hands. White Fire knows you've been hurt before by all those other shitty B-movies that promised the world and then delivered a bunch of scenes of dickheads in brown suits sitting on patio furniture. White Fire apologizes for moving so fast, but when something feels so right, you just have to go for it. Aw fuck it, White Fire's just gonna go ahead and say it: White Fire loves you, girl. White Fire loves you with chainsaws.

Anyway, Ginty and Sis head home, where the burly dude from the intro and his wife are waiting. Ginty and Sis don't bring up the chainsawing. That's just a little private memory between the two of them.

Next we cut to the only guy who possibly made more movies in Italy than Fred Williamson: Gordon Mitchell, a silver-haired character actor who looks like a mildly constipated Skeletor. He's some kind of supervillain/diamond miner or something. Apparently, Sis works for him, though in what capacity I do not know. I'm not 100% sure if she legitimately works for the guy and the whole diamond-stealing thing is just a sideline or if she's going undercover to rip him off. White Fire doesn't waste a lot of time explaining shit. White Fire has a lot on its mind right now. White Fire just needs you to trust it. Can you do that? Can you do that for White Fire? White Fire appreciates you being so understanding. White Fire doesn't deserve a girl like you.

Deep in Gordon Mitchell's mine, an ambiguous ethnic finds the title character: a radioactive diamond the size of a dehumidifier. When touched, it emits a sizzling sound and makes your skin look like the white part on the inside of an orange. So Gordo burns the guy’s face off on the diamond so no one else will know about it. Then he goes and tells some people about it. Unfortunately, these are the same badly accented assholes Ginty had to chainsaw earlier. I don’t understand this dude’s decision-making process.

We're showing signs of some plot here, but don't worry, things are about to get weird. Back at the Ginty household, Sis is swimming around naked for like 20 minutes. Ginty comes to tell her dinner is ready. It gets really uncomfortable when he steals her towel, telling her that if she wasn't his sister dot dot dot. The camera lingers on his face as he gawks at his nude baby sis like this is a normal thing that people do.

Then, even though she just got out of the pool and showered and dried herself off, Sis goes skinny dipping again. This double-dip proves to be her undoing, because the assholes from the Chainsaw Gang show up and shoot a blow dart at her head for some reason, and she dies. Ginty is all broken up about this. He's not only lost his sister, the only family he had left in the world, but he never got to find out if she would let him nail her or not. He's inconsolable. Unlike the Burly Guy, whose wife also died in the raid but you don't see him whining about it, or even mentioning it ever again. Sometimes assholes show up and stab your wife to death. It happens.

So Ginty goes out and gets drunk. A random blond chick helps him home, and that's when a light bulb goes off over Burly Guy 's head: They could get the blonde some plastic surgery so she looks like Sis and then steal the White Fire diamond! It's such an obvious plan that I'm surprised no one thought of it sooner.

For some reason, the blond goes along with this, so then we find ourselves in the unique position of watching a movie that features both plot elements stolen from Vertigo and chainsaw fights. There's a montage of Ginty and the blonde frolicking on the beach as he teaches her how to be his sister. She can't seem to get it right, though. She can't look at him like a sister because every time she looks at his sagging face, she doesn't see a brother, she sees the love of her life. Understandable. After all, what woman wouldn’t fall for a guy who wants to cut her face off and glue his sister’s on there instead? That and riding a unicorn, that’s what every little girl grows up fantasizing about.

Things are getting pretty kinky here, but they get even more so after the blonde goes to some kind of Amazonian New Age plastic surgery cult to get her face fixed. When she returns, she's magically transformed into the same actress who played the sister. Luckily, both characters’ voices seemed to be dubbed by the same person, so the transformation is uncanny.

Sis 2 promptly tries to seduce Ginty with the same boobs he so enjoyed ogling earlier (the Amazons must have copied those, too) but he manages to resist. They just make out a little, which the movie seems to think isn’t creepy beyond belief. I’m betting the screenwriter’s next family gathering was a little awkward.

While all this is going on, our man Fred Williamson enters the picture. He's Sis 2's former pimp and he's looking for his lost merchandise. Every now and then, there's a scene of him torturing somebody for information by pressing their face into a grill or shoving their crotch into a bandsaw. He's a real amiable guy, though. When he plays Russian Roulette with a dude, he applauds the man's bravery for making it through two rounds without cracking. If you absolutely had to get your nutsac sawed in half by a murderous pimp, this is the one you'd want to do it.

So eventually Ginty and Sis 2 recruit a bunch of dudes to rob the mine and steal the White Fire. The funny thing is, the fact that Sis 2 looks exactly like Sis 1 is never a factor in their plan. All they do is show up with some guns and start shooting everyone. It's actually pretty easy, since all the henchmen are helpfully dressed for maximum visibility in bright red jumpsuits borrowed from the wardrobe trailer of V.

Anyway, for some reason Ginty and Co. can't steal the diamond, so they blow it up instead. They give Fred Williamson a handful of smaller diamonds so he'll leave Sis 2 alone, and then our heroes ride off into the sunset. Ginty may not have the White Fire, but he's got his sister back, and this time it's not a crime against nature if he puts his wiener in her. It's like a fairy tale!
Posted by Mr. Majestyk at 1:04 PM