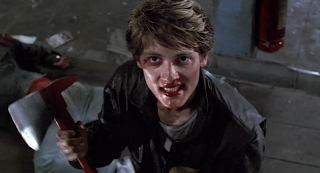 Tuff Turf is an overlooked and underrated teensploitation picture from 1985. As was common in the genre, James Spader plays a cocky rich prick. The difference is, this time he’s the hero.

Spader is this dude who used to live in Connecticut, where he spent his time getting kicked out of prep schools for being too awesome. Then his dad went broke so they moved out to the San Fernando Valley, where guido greasers in headbands and duck’s-ass haircuts earn their reps by sticking up doughy old dudes with switchblades. This is exactly what’s happening in the stylish opening montage, set to an eerie, pulsating Marianne Faithful song. The local toughs (tuffs?) are doing their thing when Spader rides by on his bicycle and breaks up the robbery without even dismounting. He gets away scot-free, except the one Latino in the gang slices the patch on the back of his jean jacket in half with a snapped-off car antenna. There’s no explanation given for why Spader decided to get involved, other than this is the kind of shit he likes to do for fun.

Naturally, this means war, so the rest of the movie is the ever escalating battle between Spader and the leader of the gang, played by Paul Mones, future co-writer of Jean-Claude Van Damme’s surrealist masterpiece, Double Team, the movie that poses the cinematic question: “What the fuck?”

I like this setup, because it’s more interesting than the usual Karate Kid format, where there’s some new wiener in town who gets picked on for no good reason until he finally grows a sac in the third act. Spader is already a badass at the beginning of the movie, and the bad guys have good reason to hate him. He fucked with them before they fucked with him. It’s almost like a Clint Eastwood movie, where a mysterious stranger rides into town and starts pissing off the locals. Spader has that naturally villainous quality about him so he makes a more interesting lead than the usual milquetoast pantywaist they stick in these kinds of movies. It’s really more of an Eric Stoltz part, but I’m glad they went a different way with it. I’d like to see Spader team up with Adam Baldwin’s character from 3:10: The Moment of Truth. They’d run that fucking school like a charity marathon.

I don’t want to give you the impression that this is a particularly original movie or anything. It’s not. All the old standbys are there: the girl from the wrong side of the tracks, the wacky outcast buddy who shows him the ropes, the inevitable locker room scene. The difference is that the girl is actually a pretty good actress (Escape To Witch Mountain's Kim Richards, pulling a Kurt Russell with her jump to adult fare), the wacky friend is Robert Downey Jr., and the locker room scene has Spader getting beat the fuck down with padlocks wrapped in towels. It’s all pretty standard, but there are little touches that set it apart.

A lot of those touches are thanks to the imaginative direction of Fritz Kiersch, a reliable journeyman best known for his first film, Children of the Corn. He gives the film an enhanced sense of atmosphere similar to Paul Brickman’s work in Risky Business. In his review of Tuff Turf, Roger Ebert knocked the film for botching the timing of its set-pieces, but I think he just hadn’t caught the rhythm of the new MTV-inspired editing. Multiple close-ups and slow-mo inserts give a feeling of elongated reality to some scenes, almost like a spaghetti western. Kiersch’s somewhat exaggerated, vaguely surreal style gives the movie a greater impact than it would have with more pedestrian direction. He used this same technique in his next film, Winners Take All, a boilerplate inspirational sports drama that felt a little more weighty than most of its contemporaries.

Did I mention that Tuff Turf is kind of a musical? That’s another thing that sets it apart. The characters don’t all of a sudden start singing, but they’re always attending live shows. There are no less than three bands featured in this movie. In one scene, Spader crashes a snooty country club with Downey Jr. and two new wave chicks, and there’s a smarmy lounge act playing a slick cover of “Twist & Shout” for all the preppies to dance to. Then Spader commandeers the stage to serenade his ladyfriend with a lip-synched piano ballad with lyrics like “I want to feel your face / I want to hear your eyes.” Naturally this wins her over, and even though she’s the girlfriend of the villain (who considers her part of his “turf”), she brings Spader with her to Club Sixties, where there’s a cheesy blue-eyed soul outfit called Jack Mack and the Heart Attack, which has a horn section in matching suits who do synchronized dance moves. While they systematically scrape the black off of Wilson Pickett’s “She’s Looking Good,” she dances all over the tables, hypnotically swinging around her crimped, ass-length blond hair. But the best musical moment comes earlier, when Spader steals a Porsche to go to a punk club to see Downey Jr.’s band, which is fronted by Basketball Diaries author Jim Carroll. While Downey convincingly mimes the drums, Carroll speak-sings his way through a set of angular post-punk and Spader woos his ladyfriend by forcing her to dance with him while the rest of the crowd helps him out by boxing her in with some elaborate choreography.

Actually, the soundtrack is kind of great, if only for Carroll’s incongruously upbeat obituary song, “People Who Died,” which was also used to great effect during the end credits of the Dawn of the Dead remake. Like the movie itself, the music is a little better than it strictly needs to be.

Tuff Turf eventually stops dicking around with musical numbers and heart-to-heart talks with various parental units. Shit gets real when the bad guys attack Spader’s father (veteran character actor Matt Clark), but the cool thing is that Dad is no token victim. He’s actually winning the fight against the three thugs when the cowardly leader pulls out a piece and blasts him a couple of times in strategically off-center places. While Dad is hospitalized, the movie climaxes in a violent battle in the punk club involving guns, axes, and Dobermans. Then it’s happy ending time as our heroes go back to Club Sixties, where Jack Mack and the Heart Attack is ripping through another energetic retro number. Tuff Turf is kind of like that: It didn’t write this song, but it’s gonna play the hell out of it anyway.
Posted by Mr. Majestyk at 1:54 PM