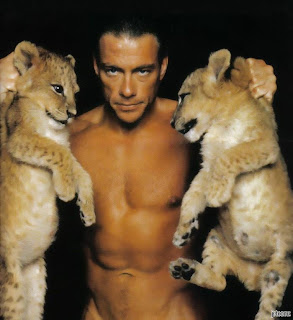 Remember that part at the end of Bill & Ted's Bogus Journey where Wyld Stallyns are about to perform for a sold-out crowd and they suddenly realize that they still don't know how to play their instruments? So what they do is, they hop into their time machine, and when they pop back up onstage a second later, they've both got ZZ Top beards and they're like, "Whoa, that was a most excellent 18 months of intensive guitar training with Eddie Van Halen." I think the same thing happened to Jean-Claude Van Damme right before shooting started on JCVD, only with acting. I think he suddenly realized that he didn't have the chops to pull off a movie that involved more emoting than kicking, so he broke his old Timecop temporal displacement device out of mothballs and went back to the fifties to take some Method classes with Brando.

Actually, I don't think even that would be enough to explain the thespianic transformation Jean-Claude underwent for this film. I think he must have pulled an Excellent Adventure and traveled throughout the seventies, assembling all of its best actors. He kidnapped De Niro from the set of Taxi Driver, snatched Pacino from Godfather II, gave Hackman the Vulcan neck pinch on The Conversation, and had just enough room left over to stuff Dustin Hoffman into the time machine in his Ratso Rizzo costume. Then they had all kinds of crazy fish-out-of-water adventures in the present day (You should have seen the look on De Niro's face when he accidentally caught Meet the Fockers on cable) while Van Damme finally, after more than 20 years in Hollywood, learned that there's more to the art of screen acting than making your eyes get all buggy and cross-eyed while yelling "Nuuuh!" in your weird, flat Belgian accent. He learned that you can't just imitate the bells and whistles of human emotions; you have to feel them deep inside, because if you don't, the audience never will. And I'm also thinking that he taught all these great actors a thing or two in return and, in doing so, accidentally changed film history for the better. Just think, without Jean-Claude's influence, Pacino's legendary kickboxing sequence in Dog Day Afternoon would never have existed.

Granted, there are probably a few non-time-travel-related factors that may have contributed to the effectiveness of Van Damme's performance in JCVD. For one, he's playing himself. It's the role he was born to play. For two, most of the dialogue is in French, his native tongue. But that doesn't fully explain it, either. I've seen plenty of jackasses try to play themselves and fail miserably, and Jean-Claude's even pretty damn good in his few English-speaking scenes in JCVD. Yeah, the more I think about it, the more the time machine thing is the only explanation that makes any sense. The only other thing I can think of is that he's secretly been this good all along, and that, my friends, is too mind-blowing to contemplate.

Okay, here's the deal: JCVD is the new Jean-Claude Van Damme movie starring Jean-Claude Van Damme as Jean-Claude Van Damme. The first scene is amazing. All the other reviews are gonna tell you about it, so I will, too. It's one long tracking shot, Touch of Evil-style, in which the camera follows Jean-Claude around a warehouse full of bad guys. In a single unbroken take, he engages in hand-to-hand combat, shoots a bunch of people, throws a grenade, and evades a flamethrower. It's well-choreographed and shot, with an awesome funky but melancholy soul song playing, but the funny part is that it's not very well executed. Punches miss by about a foot, and the timing is always a little bit off. It's all very subtle, until the scenery starts falling down, and you realize that you're on the set of Van Damme's latest straight-to-video opus, directed by some punk HK music video director with asymmetrical hair who doesn't have Jean-Claude's commitment to excellence. From the first scene, the Muscles From Brussels is characterized as a man who feels that he is capable of much more than world is offering him. He needs a mission, a calling, a raison d'être, and for his sins, JCVD gives him one.

After this straightforward opener, the structure of the movie gets all Tarantino-y, as the story is broken up into out-of-order chapters with pretentious titles like "The Answer Before The Question." It's kind of cool because you have to work a little harder than usual to piece together the story, but I'm not sure if the story itself requires it. It's pretty simple: Jean-Claude is in the middle of an expensive child custody case, but when he goes into a Belgian bank to transfer funds to his lawyer, he gets caught up in a hostage crisis of which the cops think he's the mastermind. Then he has to find out if he really does have a hero inside of him or if he's just a full-of-shit actor whose best years are behind him (and they really weren't all that great anyway).

I wish I could tell you more about the movie, but I kind of had a hard time following it. It's not really the movie's fault, though. It's just that I saw it at the Angelika, where Jean-Claude himself was supposed to appear for a Q&A, only he cancelled because, I shit you not, his puppy was in a coma in Thailand. How fucking sensitive is that? Can't you just imagine Jean-Claude sitting by the puppy's bedside, holding his paw and whispering, "Dun dew eet, ma fren. Dun go indo da lide." (Side note: "Thailand Puppy Coma" should be a Melvins song.)

Anyway, the Angelika is one of them there arthouses, which I'm all for, except that the Angelika sucks. The theaters are so long and skinny that it feels like you're watching a screen the size of a postcard through a paper towel tube. And the print of JCVD I saw had white subtitles, which wouldn't be a problem if it weren't for the fact that the cinematography is all blown-out and sun-blasted. It looks really cool, except that there are glints and sheens and splashes of white everywhere, making a lot of the dialogue illegible. You're trying to follow along, but you can only read half the words, so it's like "No, Jean…do it…gun here…police will…understand?"

This won't be a problem on DVD, though, so home viewers willl be able to fully enjoy the script, which is witty and self-referential without ever losing sight of the drama, particularly in this one scene where Jean-Claude suddenly levitates up above the set of the movie and, hanging amidst the lights in the rafters, proceeds to give an unedited five-minute monologue directly to camera. I didn't catch a big chunk of it, but he talks about his childhood and his marriages and his drug problem and his dreams. He promises to be the hero he always wanted to be, the one he pretended to be for so long that he forgot who he really was. He even starts breaking down and crying a little. I was on the edge of my seat the whole time. Not a single person in a theater full of hipster douchebags let out so much as a giggle while this man, this washed-up has-been who was a joke even in his prime, laid it all out on the line. I couldn't even understand half of what he was saying, but the emotion, man. The emotion came through loud and clear. Jean-Claude was never my favorite action hero, but he won me over with this speech. I don't think any other tough guy could have bared his soul so nakedly. Seagal might have tried, but I don't think he would have let his guard down like this. There really was no bullshit in Jean-Claude's speech at all. This was the beating, yearning heart of Van Damme, the one muscle he never got to exercise in any of his other films. I never thought I'd say this, but I wanted to give that sweaty, bulging bastard a big fucking hug right then and there.

Then I remembered that YouTube clip where he got a boner live on a Brazilian dance show and I thought better of it.

Anyway, you should all definitely see JCVD. If enough of us check it out, there is every reason to believe that Van Damme's action contemporaries will follow suit and step their game up. He's proved with this film that everyone, no matter how seemingly talentless and ridiculously accented, has hidden depths. Personally, I'm holding out for a remake of Ingmar Bergman's Wild Strawberries starring Chuck Norris as an elderly martial artist reliving the many, many asses he's kicked over the course of his life and the effect they've had on him. Or maybe even Seagal Satyricon. The point is, if Jean-Claude can do it, so can they. C'mon, guys. Let's see a little hustle out there.

P.S. How bullshit is it that the marketing department didn't use "Stock up on penicillin, because on November 7, America will catch JCVD" as the tagline on the poster? I really do have to think of everything, don't I?
Posted by Mr. Majestyk at 10:33 AM