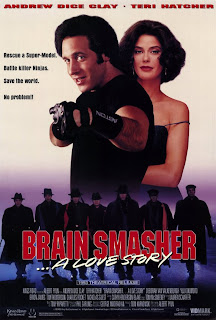 Brain Smasher: A Love Story is easily the second best bouncer movie ever made. If you have to ask what that first best is, I don’t know, man, I think you might be on the wrong page.

But that’s not its biggest achievement. Let’s be frank, there haven’t been all that many bouncer movies. It’s not that crowded a field. The same cannot be said for Albert Pyun movies, however. As of the writing of this sentence, he has directed 46 motion pictures. I can’t verify that number past that, though, because by the time I get to the end of this paragraph he might have knocked out a few more Nemesis sequels or something. I can’t keep going back to IMDB every two seconds. You’re just gonna have to take my word for it that this dude has made more or less a metric shit-ton of movies. And Brain Smasher is his best one.

Okay, fine. It’s the best one I’ve seen. Full disclosure: I have not seen even a quarter of the total Pyun filmography. I do have somewhat of a life. I have a job. Friends. Family. I go out on dates sometimes. Really. It’s a rich tapestry, the life of me. You’d be amazed.

So while I was out there trying to lay my hands on some ladyparts, it’s entirely possible that Pyun managed to squeak a masterpiece by me. Maybe Vicious Lips has a lot to say about the fragility of the human condition. Maybe Kickboxer 4: The Aggressor is that one movie that comes along every now and again that teaches you how to love again. I’m not discounting the possibility. Right now, right this second, there’s a mammal running around with a duck bill, laying eggs. Anything can happen.

So maybe being the best Albert Pyun movie out of the six or seven I’ve seen is not that big an accomplishment. But I liked it anyway. If you don’t dig loveable underachievers, you shouldn’t be watching Albert Pyun movies in the first place.

Right away, you can tell that Brain Smasher is a little different than the average Pyun movie because there don’t appear to be any cyborgs in it. Cyborgs are to Albert Pyun as big-breasted women are to Russ Meyer. I can neither verify nor deny that Pyun once lived in a house full of cyborgs in a polyamorous relationship, however. That’s where the analogy starts falling apart.

What Brain Smasher is about instead of cyborgs is this dude named Ed, a.k.a. the Brain Smasher. Ed’s a bouncer at a club in Portland, Oregon, and he’s proud of the fact that decent, hard-partying folk can have a good time in peace as long as his two fists are around. That’s what I like about Ed. He takes his work seriously and he honestly believes he makes a difference. He doesn’t get all philosophical about it like that other bouncer in that other movie. He’s more pragmatic.

He’s even got an honest-to-God origin story. Seems that when Ed was a young man, he was in a club that didn’t have a bouncer, and he took a beer bottle to the face that left him scarred. He vowed then and there that no one else would ever have their mellow harshed the way his mellow was harshed that night. It’s like if Batman’s parents got killed in the moshpit at CBGB’s. It’s not a job. It’s a calling. Someday, he’ll probably take on a young ward who also got hit with a bottle one time, and he will teach him everything he knows about smashing brains. Then someday he’ll retire and pass on the mantel of Brain Smasher to the next generation. Maybe there’ll even be a Brain Smashess or something. There’s no telling who might be inspired by this noble smasher of brains.

One more thing about Ed: He’s played by Andrew Dice Clay. Right away that’s gonna make a bunch of you not take him seriously, just because he’s a grown man who once upon a time asked other grown men to call him the Diceman. I always liked Dice, though. I was like 11 or 12 when he was a big stand-up, so his potty-mouth tough guy schtick was right up my alley. The only tape I had at the time was N.W.A.’s Straight Outta Compton, so I was and am a big fan of profanity. If you were talking about fucking somebody or something, I was listening. (Note to the kids: a "tape" or “cassette” or occasionally "cassingle" was what people used to listen to music on before it was beamed directly into your cerebral cortex by the sentient Lawnmower Man-style computer program known as will.i.am) Then Dice started making movies, and shit, I liked those, too. His starring debut, The Adventures of Ford Fairlane, is an underrated gem in the Hudson Hawk vein, and it introduced the world to the action stylings of one Renny Harlin, the wacky Scandinavian who proved that Finland’s national flower is the explosion. The problem with Dice, though, is that he was too good at being a pig. People really believed that he spent every minute of his life making bitches make him sandwiches. They didn’t get that it was a character he was playing, like Pee Wee Herman or Sarah Palin. So when it was time to branch out into other characters, it was like Big Bird trying to play a CIA agent or a lawyer or, I don’t know, anything that’s not a giant transsexual bird or whatever the hell he is. I think this hurt the Diceman’s feelings, so it added a subtle layer of sensitivity to his performances. You can see a nice guy under all that bluster, wondering why no one ever noticed that his filthy nursery rhymes were a cry for help.

That’s why he fits the character of Ed perfectly, and not just because he has prior bouncing experience from Pretty In Pink. Ed is a real stand-up guy, a brave, selfless white knight, but everybody thinks he's just a crude bruiser, simply because he punches people in the forehead for a living and wears a jacket that says his retarded nickname on the back. Both Ed and Dice want to show people that there’s more to them than meets the eye.

Ed’s predicament is mirrored by that of his love interest, played by Teri Hatcher. Everybody thinks she’s a ditz because she’s a model. So when she has to protect this ancient red lotus that gives the person who eats its petals infinite power, nobody takes her seriously.

The people who want the lotus are these Chinese monks in Phantom of the Opera masks who get really pissed off when people call them ninjas, because ninjas are Japanese. See, everybody in the movie is wrestling with public perception issues. This is a very deep movie about punching, in my opinion.

So what happens is that Teri is running from these not-ninjas and takes refuge in Ed’s club. Naturally, Ed protects her, because that’s what Ed does. Then they’re on the run, and I don’t want to give too much away, but they may possibly start to kind of like each other a little bit. Sure, this is a contractually mandated romance, but there are some little touches along the way that make it work. There’s a part where Ed brings her to his apartment and she realizes that he has a calendar that she’s in. She tries to show him her page and he stops her. He doesn’t need to see her in a bikini to like her. Then there’s a point where he decides that he’s in over his head but then when she storms off, he ends up helping her behind her back. Then he catches up with her in a bar, and he’s like, “Maybe I should stick around. If anything happens, there’s no bouncer…”

I like the idea of the bouncer as a symbol of safety and order in a chaotic and dangerous world. It’s ridiculous but kind of true. A lot of times I like to go to the bar on Mondays. Most of the time, it’s really quiet so you can get a good conversation going, but it’s also when the crazies come out. I mean, if you’re the type of person who’s going to get fucked up on a Monday, you’re probably the type of person who’s going to get really fucked up on a Monday. And while I like to rubberneck at the ranting racists who try to explain to the Mexican barback why he’s the exception, and the off-duty truckers who’ve been drinking since 2:30 and are willing to fight you because you played “Beth” instead of “Strutter,” and the shoeless junkies who are trying to steal your bag from under the bar, I’d really rather somebody dealt with them before they hurt somebody and/or jack my iPod. That’s where the bouncer comes in. They’re out there every night protecting your good time, because sometimes a good time is the only good thing you have.

You know what I mean? That’s what this movie is about. Fuckin’ heroes.

Anyway, Brain Smasher moves along at a nice clip. There are a bunch of good brawls, some excellent backflips from the not-ninjas, some entertainingly arch dialogue(“Do you think I want to be a kung-fu thug forever?”), and two great cameos from B-movie vets Brion James and Tim Thomerson as the asshole detectives who don’t believe in ninjas. Then at the end there’s a nice twist where Teri has to rescue Ed instead of the other way around. She could just walk away with the lotus but she pretty much loves the big lug at this point so she risks it all for him. Then there’s some punching and some kissing, and then credits. Way to stick the landing this time, Pyun.

By the way, I like to imagine that “Pyun” is pronounced like the sound effect of a bullet ricocheting off a rock in an old western. And like those bullets, Pyun doesn’t always hit what he’s aiming for, but at least he makes an entertaining sound when he misses.
Posted by Mr. Majestyk at 10:38 AM